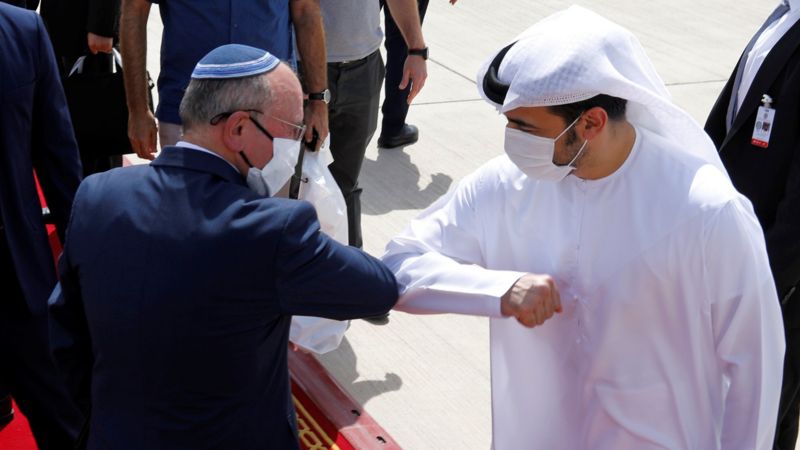 High-level delegations from Israel and the United Arab Emirates (UAE) will sign a historic US-brokered peace deal at the White House on Tuesday.

Bahrain’s foreign minister will attend the event and sign its own agreement to normalise relations with Israel, announced by President Donald Trump last week.

This is why the deals are significant.

1. The Gulf states see opportunities for trade and more

The deal helps the ambitious Emiratis, who have built themselves into a military power as well as a place to do business or go on holiday.

It looks as if the Americans helped seal the deal with the promise of advanced weapons that in the past the UAE has barely been able to window-shop. They include the F-35 stealth fighter and the EA-18G Growler electronic warfare aircraft.

The UAE has used its already well-equipped armed forces in Libya and Yemen. But its most serious potential enemy is Iran, just on the other side of the Gulf.https://emp.bbc.com/emp/SMPj/2.36.2/iframe.htmlmedia captionJared Kushner: “A new script for a new Middle East”

Israel and the US share Emirati suspicions of the Iranians. So does Bahrain. Until 1969 Iran used to claim Bahrain was by rights part of its territory. Bahrain’s Sunni rulers also regard sections of its restive Shia majority as a potential fifth column for Iran.

Both Gulf states already had barely concealed ties with Israel. They will look forward to trading openly; Israel has one of the world’s most advanced high tech sectors.

In non-Covid times, Israelis are avid holidaymakers who will be keen to explore the deserts, beaches and malls of the Gulf. It is good business all round.

Normalising relations with the UAE and Bahrain is a genuine achievement for the Israelis.

Prime Minister Benjamin Netanyahu is a believer in the strategy first described in the 1920s of an “Iron Wall” between the Jewish state and the Arabs.

The idea is that Israeli strength will in the end make the Arabs realise that their only choice is to acknowledge its existence.

Israelis do not like being isolated in the Middle East. Peace with Egypt and Jordan has never been warm. They might be more hopeful about future relations with Gulf countries a long way from the cockpit of Jerusalem and the occupied territories.

Strengthening the alliance against Iran is another big plus. Mr Netanyahu sees Iran as Israel’s number one enemy, at times comparing its leaders to the Nazis. He has muted his original complaints about the UAE’s possible arms deal.

Mr Netanyahu is also beleaguered, facing a trial for corruption that might land him in jail. His handling of the coronavirus pandemic started well and has gone badly wrong. Opponents stage weekly rallies outside his residence in Jerusalem.

A ceremony at the White House could not come at a better time.

The deal works on a number of levels for the US president.

It is a big boost for his strategy of “maximum pressure” on Iran. It is also useful ammunition, especially in an election year, to back his boast that he is the world’s best dealmaker.

Anything he does that benefits Israel, or more specifically the government of Benjamin Netanyahu, goes down well with American Christian Evangelical voters, an important part of his electoral base.

The “friends of America” alliance against Iran should work more smoothly if the Gulf Arabs can be open, rather than secretive, about their relations with Israel.

President Trump’s so-called “Deal of the Century” to make peace between Israel and the Palestinians is a non-starter.

But the “Abraham Accords”, as the Israel-UAE agreement is known, is a significant shift in the balance of power in the Middle East and is being presented by the Trump White House as a major foreign policy coup.

Once again, they are left holding the wooden spoon.

They have condemned the Abraham Accords as a betrayal. The new agreement breaks a long-standing Arab consensus that the price of normal relations with Israel was independence for the Palestinians.

But now Israel is cementing new public relationships with Arab states while the Palestinians still languish under occupation in East Jerusalem and the West Bank, and in what amounts to an open prison in Gaza.

Abu Dhabi Crown Prince Mohammed bin Zayed Al Nahyan, the UAE’s de facto ruler, says that his price for the deal was Israel’s agreement to stop the annexation of large parts of the West Bank.

But Prime Minister Netanyahu seemed to have backed away from the idea, for now at least, because of overwhelming international pressure. The Emiratis offered him a way out of what had become an awkward political cul-de-sac.

The Palestinian nervousness will increase now that Bahrain has joined the agreement.

That would never have happened without approval by Saudi Arabia. The Saudis were the authors of the Arab peace plan that demanded Palestinian independence.

King Salman’s status as custodian of Islam’s two holiest shrines gives him enormous authority. It is unlikely that he will suddenly recognise Israel.

His son and heir, Mohammed bin Salman, might be less reluctant.

5. Iran has a new strategic headache

The deal has been roundly condemned by the Iranian leadership.

It is more than rhetoric. The Abraham Accords put them under extra strain.

President Trump’s sanctions are already causing real economic pain. Now they have a strategic headache too.

Israel’s home airbases are a long flight from Iran. The UAE’s are just across the waters of the Gulf. That would be highly significant if there was a return to talk of air strikes against Iran’s nuclear sites.

Israel, the US, Bahrain and the UAE have a range of new options.

The Iranians find their room for manoeuvre has been reduced.